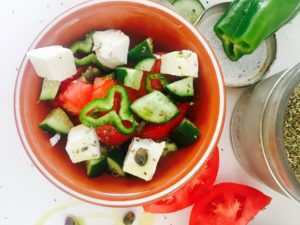 The Greek Salad still reigns in the world of globally-acclaimed salads , proudly next to the other champions of that creative vegetable-mixing art , such as the Ceasar’s , the Nicoise , the Caprese , the Waldorf, the Tabbouleh, the Cobb and that seasonal or mixed salad (whatever this last term means and which is still to be determined).

Legend has it that this salad is yet another greek smart invention, a trick, or perhaps an ingenious way of charging the customer more than what a meagre seasonal tomato salad with few slices of cucumber and green bell pepper, olives and sliced onion  would fetch. Was it in a Plaka taverna (the touristic Athens neighborhood around the Acropolis) or was it a creative hotel chef that decided to make more money on the poorer version of this summer salad (that until then its price was government-regulated!) ? Who was it really that added the big piece of feta cheese right on top of the chopped vegetables giving it a place in the pantheon of Legendary Salads?

Whoever that was,  the “horiatiki” or village salad, as the Greeks still call it, has a catchy name that reminds greek urban dwellers what their farmers ancestors took with them for lunch in their cloth “disaki” (today’s backpack) when they went to work including a little tomato, some cheese, some olives and bread. And as all things of the past and the countryside , the greek salad still holds an equally dear place in the greek psyche as on the international restaurant menus.

Dressed with just some olive oil and a drop or two of vinegar the greek salad –a healthy vegetarian choice with its tomatoes , green peppers and cucumber roughly cut , with onion , feta, olives, oregano and salt  , became a popular choice around the world and … the #1 meal of all New York lunch selections. Statistics show that most New Yorkers will select a salad for lunch and most of them will select a Greek salad , be it at the greek restaurant “Kiki’s” in NY’s China Town for a 10$ or a mix it yourself version from Whole Foods, a food retailer that even mentions correctly the typical recipe on their site. The famous greek restaurant “Milos” , in N.Y. , Athens, Greece or Toronto, naturally includes the greek salad in their menu with either feta or galotyri ( a creamier version of white cheese ).

Still alive and kicking in Greece too , of course,  the greek salad remains a darling of any tavern or restaurant that aims at tourists simply for the reason that visitors to Greece consider this a must and would be rather confused and surprised should a place chose to ban this from their menu. Not that there aren’t  many other wonderful salads served during the greek summer months; there is the boiled green vlita (amaranth) with zucchini and potatoes, the boiled redbeets with walnuts and greek yoghurt or just drizzled with red-wine vinegar and olive oil, string beans with lots of vinegar and sometimes garlic , black-eyed peas with finely chopped onions and parsley, just to name a few popular ones. Tzatziki is by many considered to be a salad too and the eggplant salad can bear that same title too although they usually appear in the appetiser section of the menu. On the Cycladic islands you will also find an interesting caper salad (made either with mashed boiled potatoes or cooked in a stifado, with lots of pearl or red onions) and a delicious parsley salad. And whoever thought of combining watermelon and feta on a salad plate definitely added another intriguing model on the runway of greek summer salads of which there seems to be no end.

Expect no lettuce-based salads during the hot greek summer months but do look for a peppery arugula salad (many times served with a soft goat or sheep local cheese, a soft myzithra that goes by many names around Greece) and cherry tomatoes and there you have your greens , fresh and aromatic,  to escort your grilled sea bass or the slow-cooked lamb with rosemary and garlic. Dakos, the famous Cretan salad (and a gratifying meal all by itself) also uses the summer delicious tomatoes but here they are coarsely grated to soften a hard barley round rusk topped with that fantastic white goat cheese and drizzled with some of their exquisite Cretan extra virgin olive oil. Drop a few capers and enjoy an extra acidity quenched with a cold beer at most of the greek tavernas on a beach or in a luxury hotel restaurant, dakos is the little black dress of most summer menus, you cannot go wrong, everyone loves it.

The Greeks traditionally serve the greek salad in a soup plate rather than in a flat one , the choice indicating that this hefty salad is to be shared around the table and that the juices collecting at the bottom of it are to enjoyed too with some freshly cut bread – this act and the actual piece of dunked bread are called a “papara” – a word that also metaphorically describes a person’s silly talk, somebody’s long spoken nonsense.

Besides the classic protagonists, a few other ingredients can also be added to the greek salad , like salty capers (collected mainly on the greek islands at the beginning of the summer when the plant produces its tiny flower buds and lightly pickled) as well as small chunks of paximadi (a hard rusk made of barley , rye or wheat that softens with the tomato juice in the salad) and even the tiny leaves of raw purslane or pickled stems of sea samphire.

But never shredded lettuce although this last version seems to be quite popular outside Greece, a useless fluffy mattress on which the rest of the vegetables will lay upon. In my opinion, lettuce and feta don’t match very nicely together : first of all , they do not belong to the same season, tomatoes are clearly a summer vegetable while crisp lettuce a winter salad delight. Plus,  the lettuce cannot quickly exude the same flavorful juices when salted like the tomatoes do so to produce the thin liquid which is a an insurance that the salad has been properly seasoned and that the vegetables are freshly cut just minutes after the order was passed on to the kitchen. A greek salad that is prepared and left in the refrigerator is a sad story with tomatoes wilting unappealingly and the cucumber tasting frozen to the tooth, to say the least. Cold Kalamata olives? God forbid!

The greek salad is one of the flagships of Greek cuisine , one that pairs best with fresh bread and roasted meat, chicken  and fried small fish or french fries , but less so with grilled fish and “ladera” (a category of mostly vegetable dishes that are cooked in tomato sauce and plenty of olive oil, ladi is olive oil in Greek). And it has stood as a main course by itself for many hungry young people and budget-aware tourists much to the dismay of the restaurateurs that prefer to bring it first, with the appetizers, the fava, the grilled octopus , the pie of the day, the taramosalata and so many others allowing thus the main courses to arrive later.

Like all food, the greek salad elevates to a star dish when ingredients are ripened naturally and come from an organic farm, when the tomatoes grow to perfection under the hot greek summer sun to a  point just before being soft (and thus more suitable for sauce and casseroles rather than a crisp salad), when the cucumbers are small and dense with flavor and not just water and the green bell peppers freshly cut off their stems. An extra virgin olive oil will elevate the greek salad and a good oregano will add to it its characteristic aroma. Kalamata black olives are the ones most often used in the greek salad (beware of the pit!) but do not be surprised if there are some green ones too or a pickled small pale green pepper, there is a tendency to deviate from the classic version in many tavernas without absolutely any need from my side -greek salad is simple and thus perfect in its original recipe.

Mixed only after it has been placed on the table and not in the kitchen, the greek salad with all its ingredients brings a smile to the guests faces , adorns and brightens the summer table like few other legendary salads do. 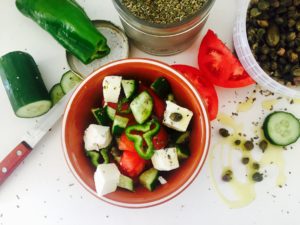 Cut the tomatoes in half and holding each half in your palm with the help of a small sharp knife remove any woody stems penetrating in the flesh.

Place each half , flesh down, on a chopping board and slice the tomato lengthwise in half without separating the two pieces, with your knife now slicing horizontally the two pieces together in four slices. Put the pieces in the serving bowl and repeat with the other half and the rest of the tomatoes.

Peel a cucumber …”zebra style”, leaving some of the dark green skin on. Remove cucumber ends and slice it lengthwise. Slice each half in thick pieces, each no more than 2 cm. Add to bowl.

Slice an onion in half and then thinly slice it again in half moons. Add the separated half moons to bowl.

Rinse the bell pepper and cut it in half. Remove stem and seeds and cut each half in six or eight square pieces or each half in thin slices. Add to bowl.

Season with salt , drizzle with oil and with a spoon toss lightly these four first ingredients. (Skip this step if you plan to serve your greek salad in more that five minutes or the crisp flesh of the vegetables will be gone!).

Take a few olives off their preserving liquid, rinse them under cold tap water and toss them in the salad. Do the same with a handful of capers . No need to mix, they will find their way in your salad and those that don’t will show nicely in the bowl.

Cut some fresh purslane from your summer garden (it is the most common weed in summer gardens, worth discovering !) and a few twigs of pickled samphire to decorate your salad with. Allow these to show at the top of the salad instead of mixing it with the others.

Take your best olive oil and drizzle again.  Add a spoonful of a good white-wine vinegar too.

Add a good piece of feta (whole or in chunks but not small pieces as they will crumble when mixed) breaking the cheese piece with your fingers. I always prefer the feta from the island of Cephalonia which is intense and salty.

Sprinkle some oregano on the feta and the vegetables. (Modern day attempts to add shredded mint or basil leaves are welcome too but these intense aromatics would eliminate the oregano scent which pairs ideally with the tangy feta and the tomatoes).

Bring a small bottle of your best olive oil to the table for those who prefer the greek salad well-drenched in olive oil (myself included, an aficionado of papara much to the regret of my waistline).

Serve immediately with two serving spoons so that guests can first toss the salad and then serve themselves.

Encourage guests around the table  to add to their helping a little bit of the nice juices , those that started being created at the bottom of the bowl few moments ago, when you salted those fantastic greek sun-kissed tomatoes awakening the rest of the ingredients so that each contributes a little to the miracle that is the greek salad. 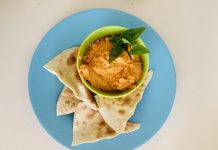 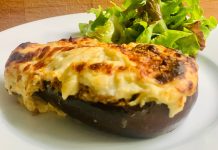 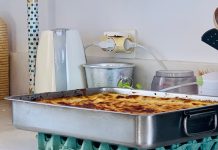