I fear that Greek mezes have fallen into a deep sleep…Zzzzzz…..

Where have all those incredible mini-sized delights, with their simple-and-not-always-cheap ingredients, presented in tiny plates and accompanied by drinks gone? Why have they disappeared, even though they represented something vital: that food complements good company, not the other way around?

Did they feel neglected? Where they made to feel ashamed of their miniscule size, unimportant, too domestic, humble, cheap and simply not enough? Nobody sticks around when their self-confidence has been crushed…not even mezes! So, they bolted, scampered away and we haven’t seen them since…

Could we have lost ourselves in the frenzy of sensationalism which has overtaken the culinary world in recent years and declared all oversized imported meals as THE food to eat with company, instead of the humble meze?

As we near the end of 2015, I have a suggestion to make: let’s revise our views on mezes, and instead of seeing them as something quick, cheap and irrelevant, let’s welcome them back with enthusiasm and not as something we’ve despised and which now sits neglected in a corner waiting patiently for our attention. Sometimes we take familiar things for granted and we care for them even less than we do for strangers! 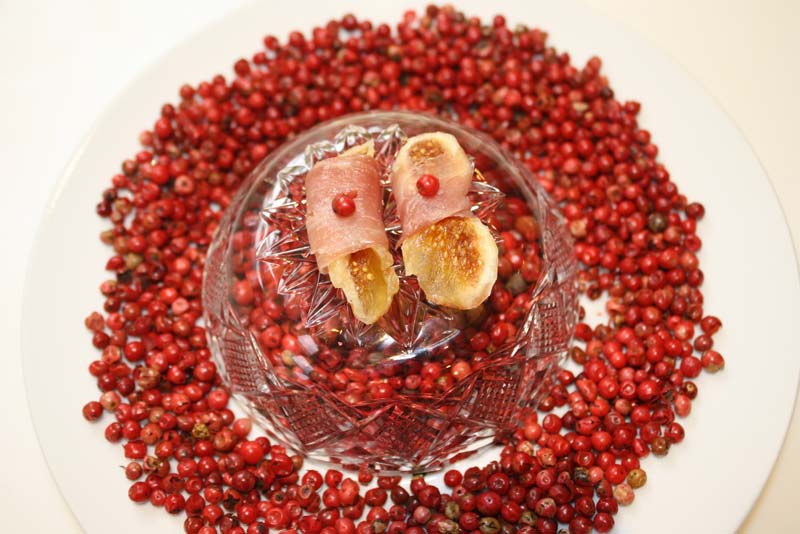 First meze! Come on over and take a much-deserved seat!

Meze with
Dried Figs with Prosciutto

Pick the best quality figs you can find, this year’s harvest and, preferably, organic. (They should be soft when squeezed).

Cut each fig horizontally into almost wafer-thin slices with a sharp knife. Don’t throw away the ends (they’re perfect for adding to biscuits, salads and cakes), just discard the hard stalks.

Choose a Greek prosciutto , cut each slice into long thin strips and then in half.

Roll each fig slice with a strip of prosciutto, 3-4 times.

Decorate each little ‘roll’ with a red peppercorn and place on a white plate. If the peppercorn slides off then put a dot of olive oil to make it stick on the surface.

There it is! A wonderful meze made entirely of Greek products! (Our meze is blushing now because we’ve paid it some attention!)

Accompany it on the pedestal of new proud Greek mezes with the sparkling wine Cuvee Karanika*, a delightful surprise which we discovered from the twominutesangie follower, Nicos Manessis, www.greekwineworld.com .

(Two Minutes Angie is now also blushing with N. Manessis’ comment which has made me very proud! Thank you, Nico! I dedicate this meze to you and thank you dearly!

* You won’t find this sparkling wine in your local liquor store or supermarket. I found it at www.houseofwine.com and ordered it online. (It costs about 16 euro per bottle, and don’t forget that tax on wine is a whopping 23%!!!)